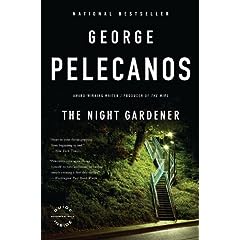 FROM Barnes and Noble:When the body of a local teenager is found in a community garden, homicide detective Gus Ramone relives intense memories of a case he worked twenty years earlier. When he was still a rookie, Ramone and his partner Dan "Doc" Holiday assisted legendary detective T.C. Cook as he investigated a series of killings involving young victims left overnight in neighborhood parks. The killer, dubbed, "the Night Gardener," was never caught. Since then, Holiday has left the force under a cloud of morals charges; he now works as a bodyguard and driver, taunted by his dreams of what he might have been. Cook retired, but he has never stopped agonizing about the unsolved case. Ramone is "good police," working as a homicide detective for the city's violent-crime division. He is also a devoted husband and father, and his teenage son, Diego, was a friend of the most recent victim, a boy named Asa." Could the Night Gardener be on the prowl again? Asa's death draws the three men together on a mission to finish the work that has haunted them for years. For T.C. Cook, it means solving one of the few cases that eluded him in his distinguished career. For Doc Holiday, the Night Gardener case is one last chance to prove - to Cook, to Ramone, and to himself - what kind of police officer he once was. For Gus Ramone, catching the killer means not only doing his job but knowing that his son will not be the next victim. The regret, anger, and fierce sense of purpose that once burned between them come rushing back as they race to lay to rest the monster who has stalked their dreams.
WHAT I THOUGHT:
Pelacanos never disappoints. His insight into his characters and how the story affects their lives is always what seems to keep the pages turning for me, the nail biting suspense is an added bonus. It's not just a crime story, it's a story that has you questioning yourself and your own ideas about right and wrong at every turn. I love the dialogue in this book, but be warned it is very raw.
I have 5 copies to giveaway courtesy of Valerie at Hatchette!
To win Please leave a comment with your email!!
That's it for today!
READ ON CHICKS!!
Posted by Amy at 11:39 AM

Please count me in.

Wow! I'm only the second one to comment, neat! Just posted on Win A Book, so no need to enter me.

I'm glad you liked this book because I also have it to read! (Don't add my name to the drawing.)

Would love to win this book!

Sounds like my kind of book! I would love to win it!

I want to win this book, thanks!

I've heard great things about this one. Please count me in the drawing.

I would love to win this book.

I really want to win this book!

Email is in my profile.

I've heard such good things about this book! Count me in!

Sounds great. I'd love to win it!

I've heard great things about this one. Please count me in.

I really like Pelecanos as a writer-his books never disappoint so count me in to win one.
JOYE
JWIsley (at)aol (dot)com

And would love to read this, too!

Hi Amy,
No need to enter me in the contest, I already have a copy of the book.

I have an award for you on my blog.
Blog Award

I am a new follower and would love to win this book, a great review.

This sounds good... I love suspense!

I'd love this book! Thank you for this GREAT blog! (I know I repeat myself, but truly, you are so awesome)

Please count me in.

I've wanted to read this for a while!

I'd love to have a chance to win. Thanks for sharing~

count me in please!! thanks!

i'd love to win this! sounds good!!