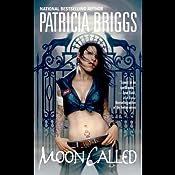 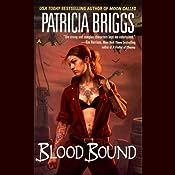 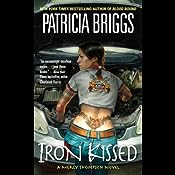 From the Author's Website: Mercedes is Volkswagen mechanic living in the Tri-Cities area of Washington. Her native american heritage has gifted her with the ability to take the form of a coyote at will. She's surrounded by far more powerful supernatural beings, including werewolves, vampires and an assortment of fey. http://www.patriciabriggs.com/books/

What I Thought: I listened to the entire series on Audiobook
over the course of about 6 weeks. This was my first experience with an audiobook, and Oh holy crap how I loved my daily commute during that time! I've been hooked since!!
I am reviewing the entire  8 book series at once here, that's not the end it's just where we are in the series.
If you like Urban Fantasy, and you haven't read or listened to these yet-you should drop everything and get going. Let me warn you though-you'll be busy because you won't be able to stop.
The world Brigg's has created with Mercy, her pack of werewolves (she's not one though, she's a coyote shifter), her VW bus driving vampire friend, and her fey landlord is so real, you can almost see yourself there.
Mercy is tough as nails, and has a knack for getting herself in trouble. Part of what I love so much about this series is yes there is romance, but it develops slowly over the course of several books. It kind of takes a backseat to the Urban Fantasy side of the story, but this is one of very few cases where that didn't leave me finding the story lacking anything. The Narrator, Loralei King does an AMAZING job telling the story.
If you've never tried audio and you're a fan of genre, I would definitely give this series a try! 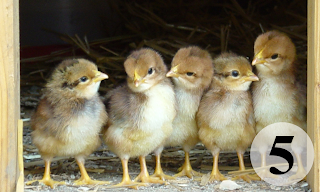