My apologies again my chickadees

For being offline for awhile and getting somewhat behind

I was up in Ohio taking care of some family matters,

and unfortunately internet access is somewhat limited for me there

over the next several days.

TODAY is A TWOFER

That means One Lucky CHICK 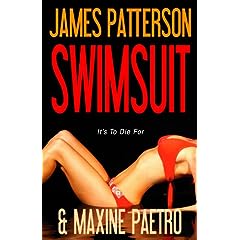 From AMAZON: Syd, a breathtakingly beautiful supermodel on a photo shoot in Hawaii, disappears.

Fearing the worst, her parents travel to Hawaii to investigate for themselves, never expecting the horror that awaits them.
LA Times reporter Ben Hawkins is conducting his own research into the case, hoping to help the victim and get an idea for his next bestseller.
With no leads and no closer to uncovering the kidnapper's identity than when he stepped off the plane, Ben gets a shocking visit that pushes him into an impossible-to-resist deal with the devil.


A heart-pounding story of fear and desire, SWIMSUIT transports readers to a chilling new territory where the collision of beauty and murder transforms paradise into a hell of unspeakable horrors.

WHAT I THOUGHT: I've liked James Patterson a long time. If he sounds familiar to you but you don't know why, it's because he's the author of the "Detective Alex Cross" books, several of which were brought to the screen starring Morgan Freeman. When two authors team up together, you never really know what you're going to get, but in this case it works. I really liked the female perspective that Maxine Paetro added to the story, while it kept Patterson's usual edge of your seat suspense!

FROM AMAZON: PhD candidate Mitch Samuel's life isn't going exactly according to plan: his girlfriend just dumped him (to be fair, he did forget to pick her up at the airport), his estranged father has landed in the hospital, and his literary masterpiece-one part Shakespeare, one part Steinbeck, and all parts lyrical epic-has been rejected for the umpteenth time.
However, after a chance encounter at Starbucks with the queen of women's fiction- Katharine Longwell-who seems to take a liking to him, he senses an opportunity for literary riches, if not reputation. After telling her that his (imaginary) female cousin is an aspiring chick-lit author, he secures a promise from her that she'll help his "cousin" get published. The only problem is, Mitch needs a manuscript, and fast.
Unfortunately, try as he might to get inside a woman's head by reading Vogue and Cosmo, watching Oxygen and Oprah, nothing seems to work. That's when his roommate Bradley suggests that he try a dance class at the studio where Bradley's sister Marie takes lessons. Self-conscious about his own skills, and unwilling to reveal his true intentions, Mitch attends the first class under an alias: Jason Gallagher, pharmaceutical rep. What could go wrong?
Nothing, except that Mitch/Jason quickly finds himself hooked on dancing, and on the charming Marie. Who has no idea who he really is. Or that he knows her brother. Or why he's there. Suddenly, his novel-writing project is becoming a lot more than he bargained for...
WHAT I THOUGHT: This is a lot of fun, and very funny. A romantic comedy, from a guys point of view and written by a guy. I really loved it because that alone made it different from any chick lit I've read recently, or maybe ever...It's also a fairly quick read perfect for a day at the beach!

One Copy of Each is going to one lucky Chick!
All you need to do to win is leave a comment with
your email!!
That's it for today!
Thanks and
READ ON CHICKS!

Thanks! I have a friend who is reading "Swimsuit" and has told me it is to die for! So I would love to read it and then be able to share my opinions with her!

Count me in! I'm dying to read Swimsuit, and the other one looks good too!

count me in please.
thank you

Count me in too. Thanks for the giveaway.

I would love to read both of these books!

I would love to win these books. Especially Ms Taken Identity.

Oh my gosh! how exciting.. Thanks for the chance!

Glad you had some family time Amy. This is an awesome giveaway! They both sound excellent. Put me in: wingsfan01062@yahoo.com

I've finished reading both the book I won and the one my mother won. NEED MORE BOOKS!!

Count me in please!

I'm just going to have to check out James Patterson, he pops up all over the place! Just posted on Win A Book, no need to enter me, Amy.

I would love both of these!

I'd love to be entered! milou2ster(at)gmail.com

What a great tofer, count me in! tWarner419@aol.com

Thanks, please enter me.

It's wonderful to see you back!

This is exciting! 2 great summer reads in one contest! I'd love the chance to win these please!

These look great..please enter me!

Please include me. They book look great.

The second book sounds rather interesting! Thanks for the chance.
unforgetable_dreamer_always(at)hotmail.com

Looks like a good read, please enter me into this drawing.

Thanks for hosting this giveaway.
jake.lsewhere[at]gmail.com

They both look interesting! Please enter me!

Count me in please!
bunnybx at gmail . com

Both sound like great books. I've always been a James Patterson fan and I love me a good romantic comedy whether it's a book or movie.

Outstanding giveaway. Please count me in. Thanks.
jessica(at)fan(dot)com

These look like great books. Please count me in if I'm not too late.

I hope your family stuff works out well.

It would be great to read both of these!

That last book looks great. Chicklit written by a man!

ooooo enter me!! these sound gret!!

Woo hoo! Over here! Please count me in. Thank you!

Please include me in your giveaway.
Thanks
Carlene
iluvreading(at)Verizon.net

Please count me in - Thanks!

I'm a little slow. If it's not too late, please enter me.