I've got something a little different for you today Chicks! 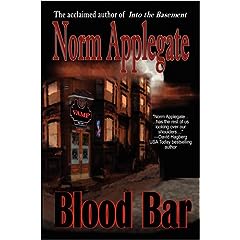 Blood Bar, is a vampire tale.

Vampires don’t exist...yet, on the brownstone back alley side streets of New York, a vampire dies. Desperate, his lover turns to Kim Bennett, author Norm Applegate’s quintessential heroine whose passion for S&M led to celebrity status as a hell-and-back murder mystery sleuth who’s been there, done that, and then some. This time, Kim finds herself caught between a secret vampire society’s attempts to locate The Black Testament (a sacred document written by Jack the Ripper), the modern-day vampire hunters bent on their destruction, and a white knuckled journey of self-discovery that catapults her into the bowels of hell and the arms of the ultimate vampire.......courtesy of The Haven, New York’s ultimate BLOOD BAR.


When and why did you begin writing?
Started writing in the 90’s while traveling to sharing my experiences with my wife. But began my first novel, Into the Basement in the mid 90’s. It took me a couple of years to get into the daily habit of writing, and reading everything I could about developing a story, it took awhile to find the zone
Always wanted to write a book, didn’t know how, thought it was beyond my capabilities, but while working in New Zealand it began. The hypnosis career changed my life, and realizing nothing is impossible, began writing short notes, tales, and just life experiences to my wife back in the States.

When did you first consider yourself a writer?
That moment was when a few readers, strangers actually, people I had never met, sent me emails, or talked to me about something I wrote. The book was Into the Basement, abduction, torture, murder, the usual romantic stuff that makes you squeeze your thighs tight, warms your face, and blush sinfully. It surprised me, thrilled me to know people liked what I liked...I wasn’t alone from that point forward, my dark side had an outlet, freedom.

Do you have a specific writing style?
Yes, I have found my voice. I weave factual information into the plot. For instance, in Blood Bar, a vampire tale, the references, and murder descriptions to Jack the Ripper are all real, as are the unknown facts about the Brooklyn Bridge, did you know John Roebling the builder, died before the bridge was complete, tetanus, cut on something they believe, I think he was bit by a vampire. Let me show you what I mean, here’s an excerpt from Blood Bar

How did you come up with the title?
Blood Bar, A Vampire Tale...what the hell is a blood bar? Sounds creepy, but intriguing. The premise for Blood Bar, was what would happen if you found out you were turning into a vampire. Where else to be initiated but a bar. So I built the plot around my murder mystery sleuth and heroine Kim Bennett, she’s in my first two novels, murder at a bar for vamps, gothic dressed men and woman, and your basic role playing vampires, however it’s fertile ground for picking up fresh meat...if you like that sort of thing. Are you going ask if blood bar exists, I can’t disclose that here for fear of being arrested...blushing sinfully.

If you had to choose, which writer would you consider a mentor?
I’m lucky, I have a mentor, USA Today’s best selling author David Hagberg. My writing has improved because of his influence, if you haven’t read his works, do it now. He writes realistic CIA terrorist novels.

What are your current projects?
Just finished re-editing Into the Basement, was never happy with what my previous publisher did to it. Next is the screenplay to Basement, written by Nicholas Grabowsky and myself, we have a producer/distributer interested, and the movie is cast with Courtney Gains, then my next novel in the Kim Bennett series that I’m tentatively calling Black Sun Rising, is another vampire tale. You can go to www.intothebasementthemovie.com to read more about the cast, director J.L. Botelho, and see his trailer for Into the Basement...it’s wicked, prepare yourself, you don’t want little kids watching this, seriously don’t let your kids see this.

I need to interject a warning here that what you're

about to read is not for the faint of heart!!

Kim Bennett stood still, her head was spinning and she was not sure whether to sit down or stand as Nicolai moved toward her. He looked beautiful. The cubicle with its large table could easily sit eight, and with the drapes shut afforded the luxury of an additional four feet of open space.
He moved closer and extended his arms, Kim stepped forward, and in the tight space Nicolai managed to circle her taking in her physical beauty.
She felt his presence press against her back, and lifting her hair his hand brushed her neck sending a rapid shiver through her body. Kim tilted her head, relaxed her shoulders, and deliberately inhaled and exhaled slowly to control her thundering pulse.
With her hair flowing over his face, Nicolai stopped moving. “Your scent will stay with me forever.” He filled his lungs and continued, “I didn’t know it would be like this.”
“Do you remember the moment we first saw each other?” Kim said, her eyebrow rising seductively. “I couldn’t take my eyes from you.”
Nicolai slipped his hands down along her sides and nervously lifted her sweater over her head. “I wanted you from that first glimpse, all of you.” (I had to remove a pretty racy scene here so blogger doesn't rate me X)
Out of breath, Kim sat upright and cleared her throat. She ran her tongue over her lips, and for the first time let herself accept the undisputed truth, she was a vampire.
“Yes you are.”
“You’re reading my thoughts,” Kim said. “I can block you can’t I?”
He frowned, “If you want.” Then he grasped Kim tight around the waist and smiled. “But I’ll always find you, I’m a good hunter.”
“What happens now?” Kim asked.
There was a silent moment, “With us?” Nicolai knew the meaning to Kim’s question, not only was it about them but also the Black Testament. “We find the last piece of the Testament, destroy it, maybe hide it.”
Nicolai had a concerned look, “You know they’re coming after us?” he said. “I knew the moment I accepted your journey someone would be gunning for me.”
“Then why did you do it?”
“It’s easy to explain, I knew you were special...I just knew in my heart you and I were destined to be together,” he said.
Kim turned her head to hide her smile. She was in love like a school girl and it was embarrassing. “We’d better get going.”
She jumped off the table, grabbed her clothes, and started to get dressed. Nicolai didn’t move. His eyes studied every curve of her body, memorizing her beauty.
“You’re a stunning woman.”
Kim had her back to him and grinned, he loved her, and she knew it. In that moment she wished all this was behind them. The thought of having a haven of vampires after them was not a good thing.
“You said...you knew where it was?” Nicolai’s tone was worried. “Are you sure?”
“I got a feeling when Rose and I were at her house. I didn’t know it then, but after we left I couldn’t shake it. We need to go back there.”
“Okay.” Nicolai murmured.
“There is something about Rose’s father," she said. You’ve never met him have you?”
“All I know is that he’s dying.”
“If she had it, none of this would be happening. So it has to be her father,” Kim said. “He goes back to my childhood, and he knows...” Kim was absolutely right, Thomas Nicholls knew things about Kim that nobody else did.
“Knows what...” Nicolai asked.
“He knows who I am.”

I'm giving up my copy to one lucky winner!

To Enter please leave a comment with your email

us and canada only please no po boxes

winner will be announced June 9th

Thanks to Mr. Applegate for being a part of my blog today!

Have a great one! and

Thanks so much for being part of Norm's Book Tour!

Thanks for the excerpt and interview. I will be adding this to my summer reading. Have a great week.

I want to read this

Need to find out about that racy scene...sign me up!

Please enter me for this drawing. This book sounds like it's right up my alley.Thanks! Indigo

No need to enter me, darling. I'm just dropping in to say thanks for the e-mail. I've got this posted at Win a Book for you.

I have to say that vamp tales aren't always what I'm into, but this one has me totally intrigued.

I would love to win a copy of this one.

please include me in the giveaway.Sounds like a great book.
elaing8(at)netscape(dot)net

My kind of read, count me in!

Thanks for the review and interview! This book sounds like something right up my alley!

I would love to be entered.

Sounds good and a book to follow, thank you for sharing

Looks interesting - please count me in!

Sounds like a great book. I would love to be included.

This sounds so good!!

Whoa! What a wild book. I'd love to win!

Hey chicks, I'm over in Rome, cool weather, raining, saw the colosseum today, drinking coffee, sambuca, and tomorrow is a bank holiday, will visit the vatican Wednesday. Wonder if the pope uses a MacBook?

Thanks for everyone's comments

All the best
Norm

I would love to read this one. Please enter me in the giveaway

Sounds like my kind of book. I would love to win. thanks for the chance.

Sounds delightfully naughty - I can't wait to read the missing portion of the excerpt!

Now that sounds like a vampire story with some 'ahem' meat on it. Put me in for it. wingsfan01062@yahoo.com

Sounds good. I'll have to add it to my list to be read. Toss my name into the contest please :)
findtimetoread (@) gmail (.) com

sounds great thanks for the giveaway minsthins at optonline dot net

I would love to be entered! Thanks for the opportunity!

I would love to read this on the beach this summer!

Looks like a great book. Thanks for the chance

Amy the only way to read a book is gently, I like to keep my books the way I get them. Thanks for sharing your books!

Wow. This book sounds great. Please enter me. Thanks!

This is my kind of book! Please enter me in the draw.

How interesting. Thanks for the chance to win!
1bmore @ gmail . com

always interested in vampire books so please enter me.

Oooh - after reading your fab review I cannot WAIT to read this book!!!!

Love to have this.

Please include me in your giveaway.
Thanks
Carlene
Iluvreading(at)verizon.net

I'd love to read this.
jwx4 at yahoo dot com

My wife would love to read this!!